Difference between revisions of "RaceCapturePro Sensors"

Refer to your sensor's data sheet for the sensor's calibration curve.

A linear sensor may specify two voltages/value pairs representing a low and high range for the sensor. A straight line is drawn between the points on the sensor.

In the Analog Channel configuration, select the "'Mapped"' sensor mode, and then enter the values into the interpolated mapping grid.

These are often seen with thermistor based temperature sensors, where the response is not a straight line, but a curve. Multiple points can be used to sufficiently approximate the curve.

In the Analog Channel configuration, select the Mapped sensor mode, and then enter the values into the interpolated mapping grid.

Temperature sensors are passive devices that measure temperature through the use of a thermistor, a resistor that varies resistance with temperature. 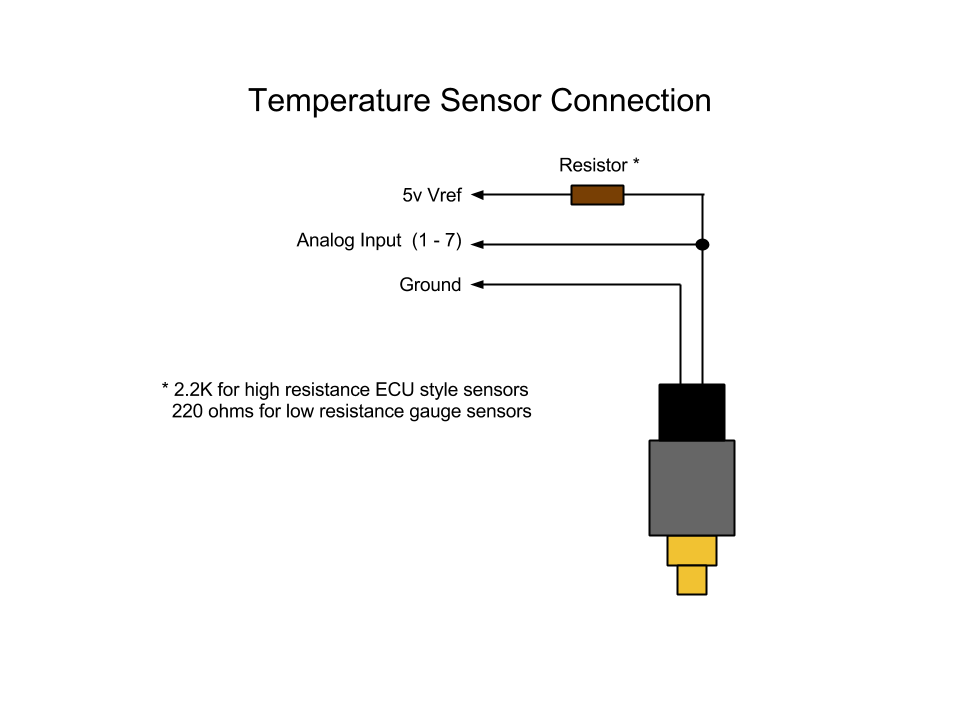 Use a 2.2K ohm pull-up resistor for high resistance ECU style sensors, such as the temperature sensors in the supported list

Two wire ECU style temperature sensors have one sense lead and one ground lead. For best accuracy, connect the ground lead to the same ground point as RaceCapture/Pro.

One wire gauge type sensors have the ground as the body of the sensor. Ensure the engine is properly grounded to the chassis via multiple ground straps.

Active sensors are powered devices that provide a variable voltage output related to the environment being measured- such as pressure, distance, temperature, speed, force, etc. 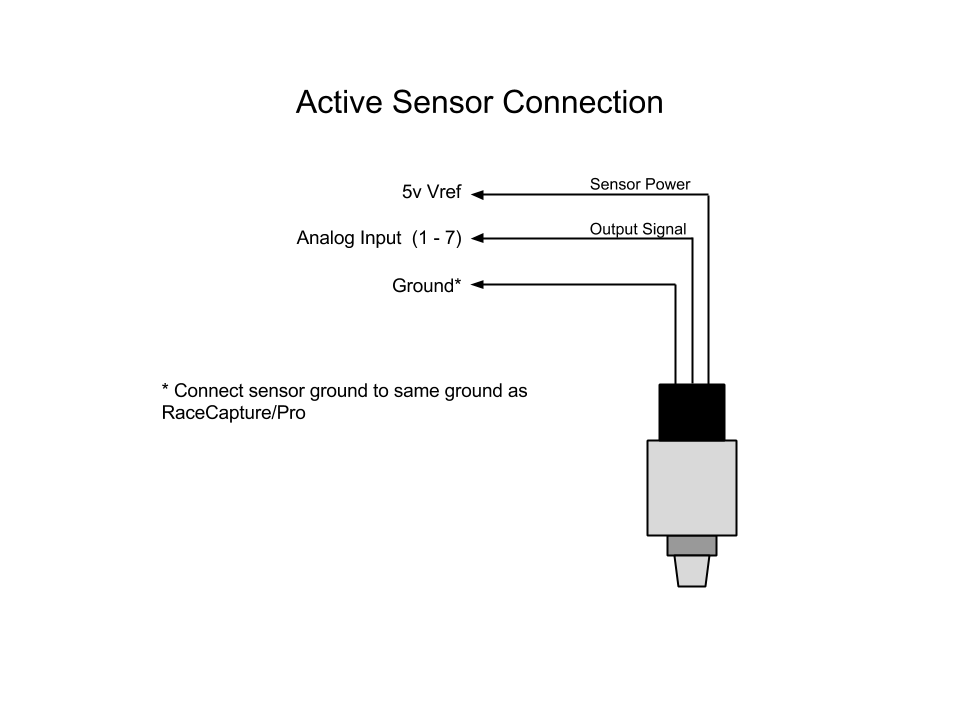 Active sensors are particularly easy to wire. Nearly all active sensors for automotive applications specify 5v power and produce an output within 0 to 5v, making them directly compatible with RaceCapture/Pro. Most active sensors have a linear output and therefore are very easy to calibrate.

Steps for connecting an active sensor

Wheel speed sensors generate a series of pulses as a toothed wheel passes by the face of the sensor. We recommend hall-effect style sensors, and these are provided with 3 connections:

Note: - We do not recommend using 2 wire Variable Reluctance (VR) type sensors. VR Sensors will require a conditioning circuit before being provided to the inputs of RaceCapture/Pro. 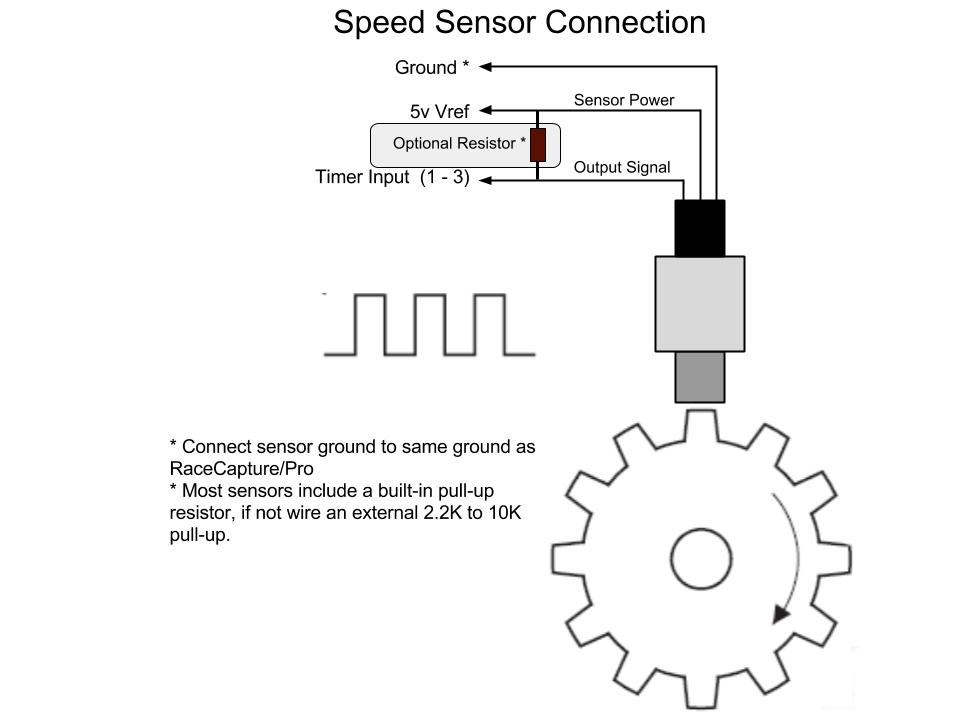 RaceCapture/Pro requires both a voltage and ground pulse provided in the waveform provided by the sensor. Most sensors provide an internal pull-up resistor so an active square wave can be observed on the output. However, some sensors only switch ground and leave the output line in a high impedance state when not active, like opening and closing a mechanical switch. If the sensor does not provide a pull-up resistor the wheel speed signal may have noise and glitches which may be observed as high value glitches in the dashboard and log file data.

If it's determined a pull-up resistor is needed:

These type of sensors are passive devices comprising some form of a variable resistor. Examples include: 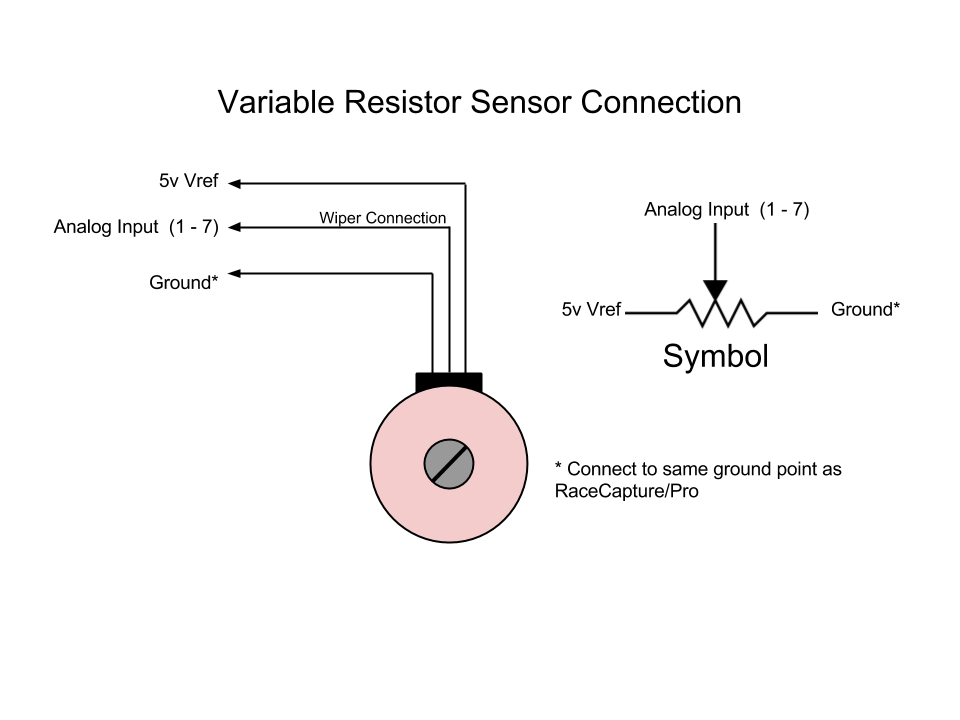 During calibration, if the sensor reads backwards, flip the 5v and ground connections.

Determine if you need a pullup resistor, or if you are tapping into an existing circuit with a gauge.

If you already have a gauge connected

You will not need a pullup resistor - the gauge's internal circuitry already provides one. You will only need to tap into the existing signal feeding the fuel gauge sender. Jump to the calibration process below. 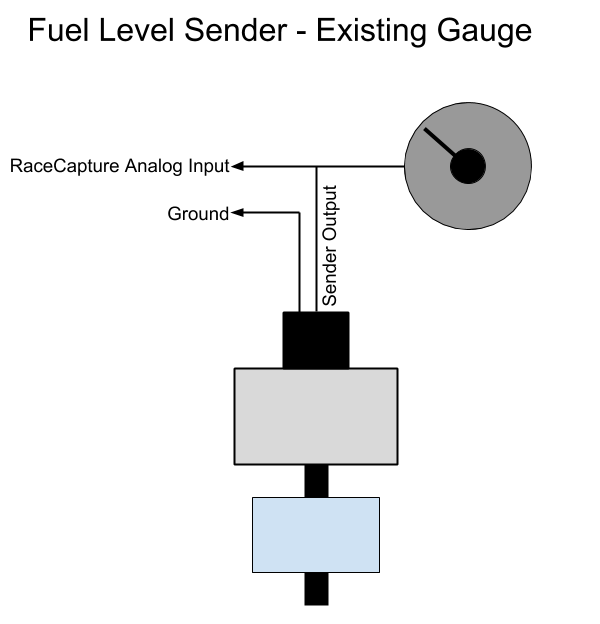 If you only have the sender and want to directly integrate with RaceCapture's analog input, follow this procedure. 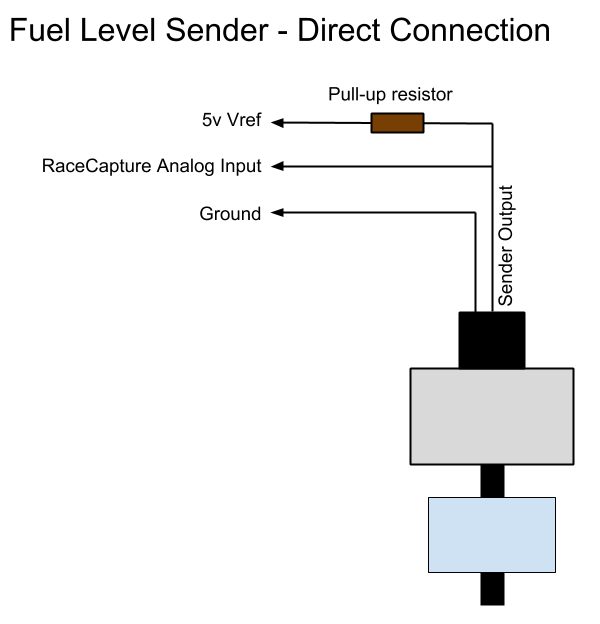 With the fuel at different levels, measure and note the voltage present at the RaceCapture analog input for different fuel levels:

Set up the Analog Channel

SensorX is a breakout / distribution board that will make it easier to use sensors that require pullup resistors as well as making available multiple ground and 5V Vref connections. The built-in pullup resistors are easily disabled by breaking a designated trace on the board. This board is compact; enough to be bundled inline with your wiring harness and covered in heat shrink tubing when complete.