Difference between revisions of "AutomaticCameraControl"

This guide shows you how to enable automatic start / stop control of WiFi enabled cameras, such as GoPro using RaceCapture or PodiumConnect.

Most action cameras offer a WiFi interface for remote control. GoPro is one such camera, and allows shutter control via the WiFi interface, which RaceCapture or PodiumConnect can leverage for automatic triggering.

Note, We recommend GoPro 2/3 due to stability / reliability issues seen with the later GoPro devices.

Additional Camera support will be added with future firmware releases.

RaceCapture or PodiumConnect is configured so it's WiFi client connects to the camera's access point using its SSID and WiFi password.

When RaceCapture/PodiumConnect triggers the camera based on a sensor threshold such as speed, RPM or other value, it sends a command to the camera to start recording. When the sensor falls below the threshold, the corresponding command is sent to stop the recording.

Navigate to Setup / Wireless and ensure: 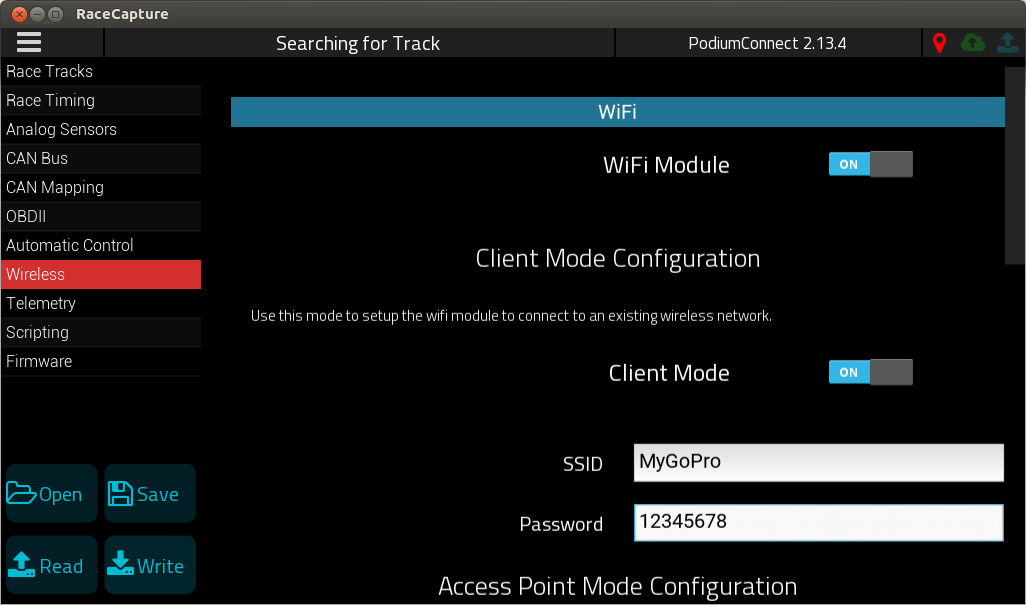 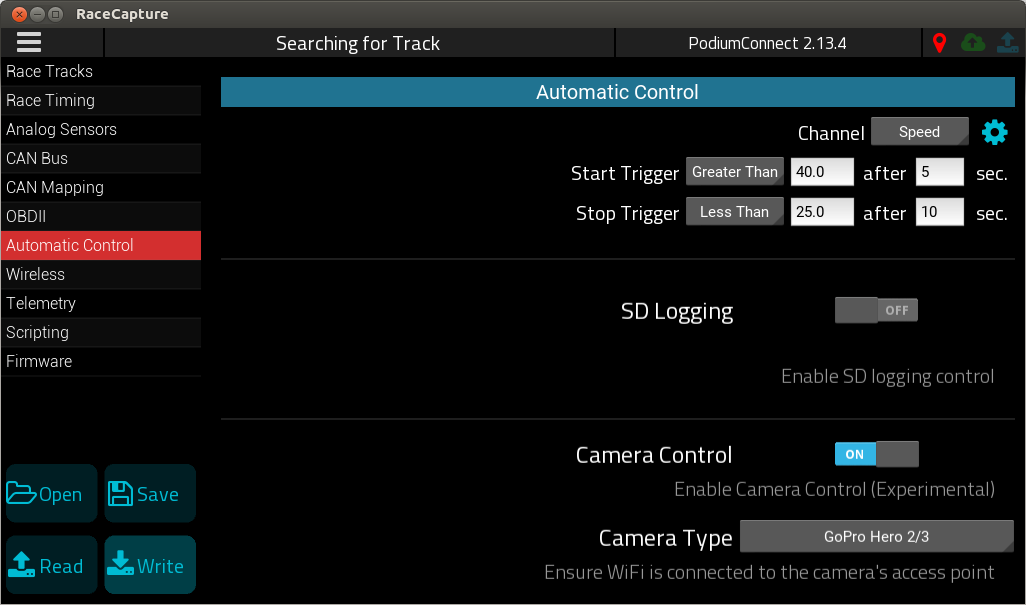 Write the settings back to RaceCapture by pressing the Write button under Setup.

Turn on the camera and ensure the camera has it's WiFi interface enabled.

Power up RaceCapture, connect the RaceCapture app and verify the WiFi client is connected under the System Status page. File:Verifying wifi client connected.png

It may take several seconds for the client to connect. If not, re-check the camera's SSID/password, and ensure WiFi is enabled on the camera.

Once it is connected to the camera, you can test the camera by triggering the configured camera's threshold.

While the automatic camera control firmware feature is not available for RaceCapture/Pro MK2, it can still be controlled via a Lua script. 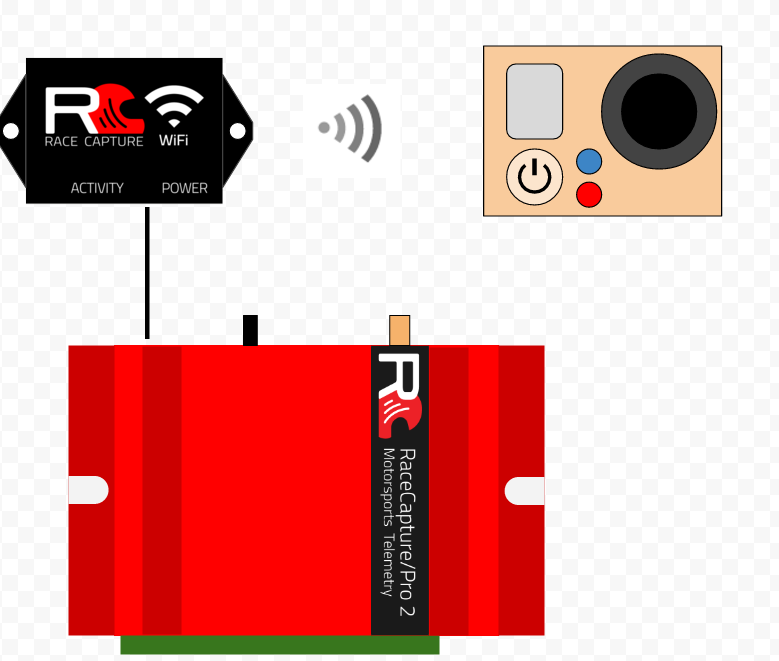 When WiFi is enabled on your GoPro camera it creates a network that other devices can connect to. A WiFi enabled version of RaceCapture/Pro can connect to this network and issue the appropriate commands to control various camera functions - in this case, starting and stopping video recording.

Starting and stopping the GoPro can be controlled by a variety of means: speed, RPM or based on other sensor data, enabled by a Lua Script running on RaceCapture/Pro.

This guide focuses on using GPS speed to trigger the camera; for triggering on other sensors see the Lua scripting guide as a reference for what other sensor data is available.

Using the GoPro app, configure the WiFi network, making a note of the network name (SSID) and password. 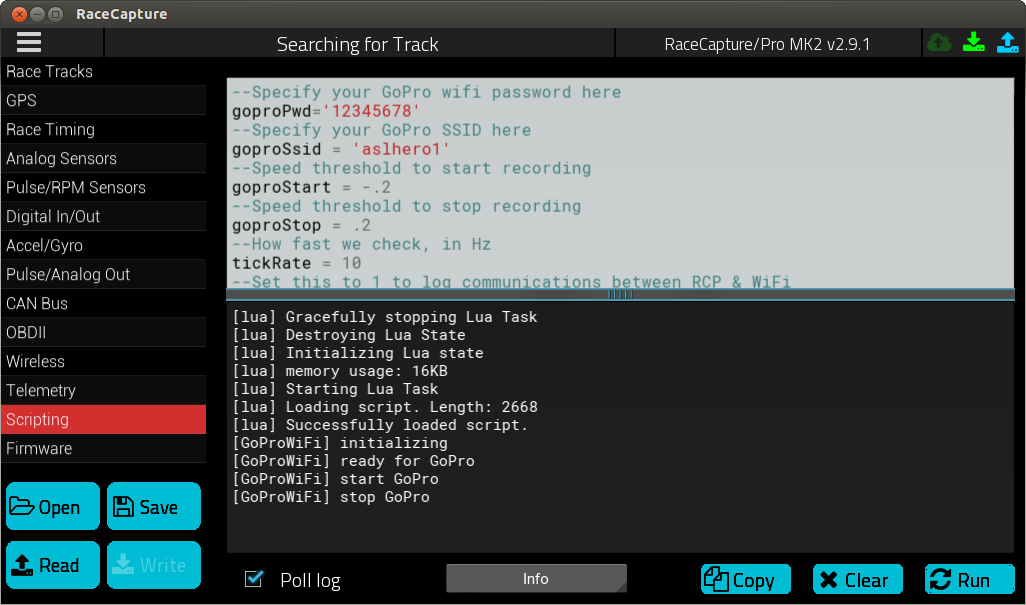 Once the Lua script is written to RaceCapture/Pro, it will attempt to connect to the network created by the GoPro camera. Once connected, it will be ready to issue start / stop commands to the camera. 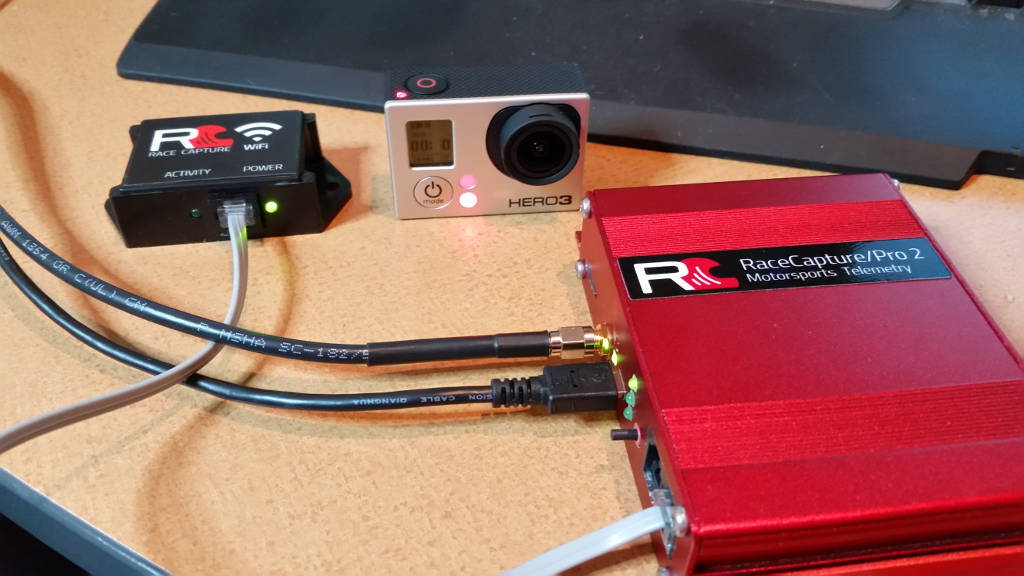 Before road testing, ensure RaceCapture/Pro can connect to the GoPro's WiFi network by observing the messages in the window below the script.

Mount the GoPro in the car as usual and power up RaceCapture/Pro, waiting for GPS achieve a lock.

As RaceCapture/Pro starts and stops the camera, you will see the following information in the log:

If RaceCapture/Pro cannot control the camera, check the following:

If RaceCapture/Pro cannot connect to the GoPro's network you will see this in the log:

The following Lua Script enables WiFi control of your Garmin Virb camera using the Garmin Camera Network Services API. Not all commands in the API may work. Use commandList (via Postman) to determine which API commands are supported by your Garmin Virb camera.
The Garmin Virb always uses 192.168.0.1 HTTP port ( 80 ).
NOTE: this Lua script is different than the GoPro script above in that Garmin uses POST commands instead of GET commands.
For a more detailed explanation, see How to send HTTP POST request via Lua Script?
It may be possible to control other WiFi devices by altering the POST command accordingly. e.g. instead of sending httpPost arguments {"command":"startRecording"} substitute this with the commands specified by the device API. Be sure to adjust the server host IP address if different than the Garmin standard.